Two thirds of the people in the U.S. have no idea that most of what they eat every day contains genetically modified ingredients — starting with the primary foundation crops grown in our country.

As of 2014, the USDA reports the following percent of all crops grown in the U.S. are genetically modified:

The following represent percentages from 2012, as no current data can be found on the USDA site:

*Because corn has been engineered to produce its own insecticide as it grows, the Environmental Protection Agency now regulates corn as an insecticide.

To check a specific crop, consult the GMO Compass database. For a comprehensive list, consult the Institute for Responsible Technology’s website. 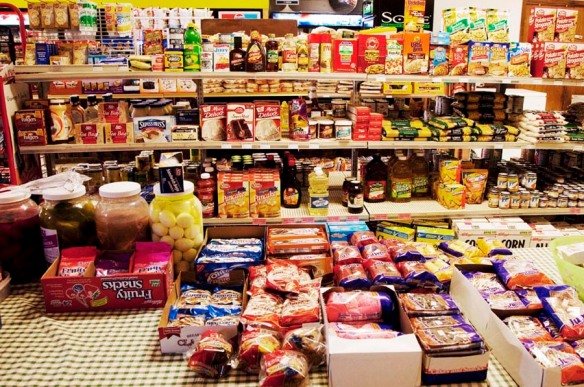 Think you don’t eat much of those crops? Think again. GMO is nearly impossible to escape because the byproducts of genetically modified soy, corn and sugar beets are used in almost every single processed food made in this country.

A few years ago the Grocery Manufacturers of America estimated that 75% of all processed foods in the U.S. contained a genetically modified ingredient. And the numbers have only gone up since. Most of these GMO ingredients come from the “Big Five:” corn, soybeans, canola, sugar beets, and cottonseed (used for oil).

Other Sources of GMOs:

Here are the specific types of foods that rely heavily on GMO ingredients in their processing, unless they are certified USDA Organic or Non-GMO Project verified:

Drilling down one final step, click on this page to see an extensive list of ingredients that are derived from genetically modified corn, soy, sugar beets, canola, and cottonseed oil, which are used in the processing of the above list of GMO Foods to Avoid.

—
© GMO-Awareness.com, 2011. Unauthorized use and/or duplication of this material without express and written permission from this blog is strictly prohibited. Excerpts and links may be used, provided that full and clear credit is given to GMO-Awareness.com with appropriate and specific links back to the original content.